Mami Jewell, owner and designer of AZUL will be looking for the next beautiful lady to take the crown for a one year tenure, taking it over from Tania Tebaldi who had been reigning as Miss AZUL 2010.
The new Miss AZUL will also be given a placement as an official finalist in the Miss Virtual World 2012 Pageant but those who are already finalists will also be accepted for entry.

::: PRIZES :::
Miss AZUL 2011
– 50,000 Linden cash prize.
– AZUL wardrobe consisting of all current designs and all new releases throughout the entire one year tenure.
– Appearrance in AZUL print advertisements and posters with Hair from Vanity Hair, jewelry from Virtual Impressions and shoes from Stiletto Moody. This may not, however, be done for all new releases. 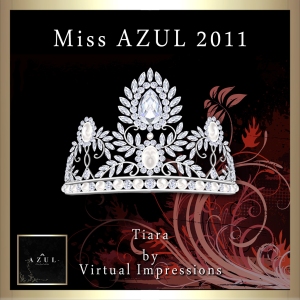 STEP 1 – Check if your answer to all of the following questions are YES.

A) Are you available to appear live on the AZUL Finals date (Saturday August 27, 6pm SLT)? You can only enter if you are able to be here at the Finals in case you become selected as a Finalist. In the case that you are not available, you will be dropped from a Finalist and the next person on the selection line will automatically move up to being a Finalist.
B) Are you free of any other Miss title from a clothing brand?
C) Will you be able to commit to being a Miss AZUL for a tenure of ONE YEAR if you have been selected? We understand that things can happen that may change the various conditions in your life, however if you are not sure if you can commit to a one year tenure, then please do not enter.

STEP 2 – Join THE BEST OF SL Magazine Readers Group and the AZUL group in-world. You must be a member of both of these groups to participate and receive updates.

STEP 3 – Create a notecard titled “Miss AZUL 2011 – (Your name here)” and Include the following in the notecard.
A) A short paragraph stating why you believe you would best represent the brand of AZUL
B) One 512×512 face shot of your avatar wearing an AZUL outfit.
C) One 512×512 full length shot of your avatar styled using AZUL creations. Complete outfits or mix and match are both accepted but all outfit parts must be from AZUL.

STEP 4 – Submit the properly titled notecard to both Kay Fairey AND Mami Jewell no later than Midnight (SLT) on Auguest 13, 2011. You must send to both in order to be eligible.

All entries that have satisfied all entry rules will be posted on a wall in the AZUL Main store.
Please go check if your pictures are posted.
http://maps.secondlife.com/secondlife/joia%20azul/114/128/25

If you can not find the pics you have submitted, that means there was something that you left out. So please read the entry guideline carefully again and contact Kay Fairey after you have completed the conditions of entry.
Once it is confirmed that all conditions are met, your pics will be posted on the boards.

IMPORTANT: PLEASE ALLOW UP TO A WEEK BEFORE CONTACTING AS WE CANNOT POST ALL PICS SO SOON AFTER WE HAVE RECEIVED YOUR ENTRIES.